We usually think of fossils as being composed of minerals or other molecules that have replaced the original biomolecules that made up once very alive organisms. Modern paleobiology however, is hot on the trail of "Ancient Biomolecules". While knowledge of the preservation of such compounds alone is worthy of our attention, preserved ancient biomolecules can also tell us much about an organism's physiology, behavior and the environment in which they lived.

The mosquito pictured above has a distended abdomen - it is full of a blood meal. This is the fossil of a blood-engorged mosquito, one of several found in the Kishenehn Formation. But how can we prove this assumption?

The surface of a blood-engorged mosquito fossil's abdomen shows a layer of homogeneous ancient organic material, mostly carbon.
When specimen specimen USNM 559050 was examined at very high magnification, the material in the mosquito's distended abdomen looked like a homogeneous layer of graphite (a). Elemental analysis showed that it was about 70% carbon (b) - fossilization had not resulted in its mineralization. Whitish material (a) on the surface of the fossil contained the elements silicon (Si) and oxygen (O) and the metals magnesium (Mg), potassium (K) and aluminum (Al) which identified it as an opaque silicate mineral.

Further analysis in the laboratory of Tim Rose in the NMNH's Mineral Sciences Department, identified high levels of iron in specimen USNM 559050 - but only in the dark material in the mosquito's abdomen; iron concentrations in the rest of the insect's body and adjacent shale were low. The presence of iron - it makes up 0.35% of the weight of hemoglobin - suggested that the dark carbon-rich material in the mosquito's abdomen was actually blood, or at least was derived from blood from the insect's host.

The protein molecule hemoglobin contains four molecules of heme, each containing an atom of iron.
Because the large organic molecule heme contain's the iron found in hemoglobin, mass spectrometry was used to determine if the heme molecule itself had been preserved. Work by Sandra Siljestrom and Yulia Goreva showed that, indeed, it was present. The spectra below were taken from the mosquito's abdomen (a), purified pig hemoglobin (b) as a positive control and the shale adjacent to the fossil (c) as a negative control. The spectra (d, e and f) depicted below are magnified portions of the original spectra. It was a perfect match! The biomolecule heme, with its bound iron atoms, had been preserved! This is the first definitive proof of the hematophagic (blood feeding) behavior of Eocene mosquitos.

The fingerprint-like spectrum of heme fragments generated from the abdomen of a blood-engorged mosquito (a) and pig hemoglobin (b) as a positive control.
The preservation of heme in a fossil insect from the 46-million-year-old shales of the Kishenehn Formation suggests that other biomolecules may have also been preserved. As a result of this finding, the identification of additional ancient biomolecules in the fossil record has become a major focus of my research.

The figure below is that of a fossil rove beetle (family Staphylinidae). Living beetles often incorporate metal, usually zinc, into their jaws to strengthen them. The beautifully preserved mandibles (A) of this particular fossil provided us with the opportunity to determine if it too had used zinc to toughen its mandibles. The image in B identifies and localizes the element carbon in the beetle's mandible. In C, the metal zinc is localized. Note that it is present only in the mandibles; it is absent from the neck of the insect. The strengthening of mandibles in insects is an evolutionary adaptation that was developed at least 46-million years ago. 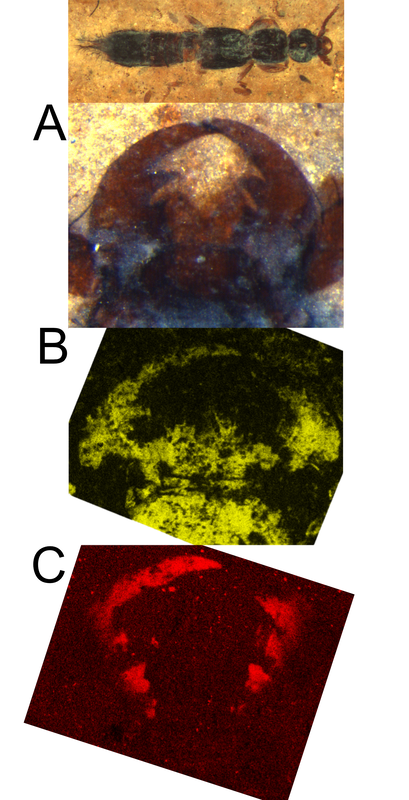 Images of a fossil beetle mandible and its elemental analysis. B) localizes the element carbon; C) localizes the metal zinc - used by insects to strengthen their jaws. 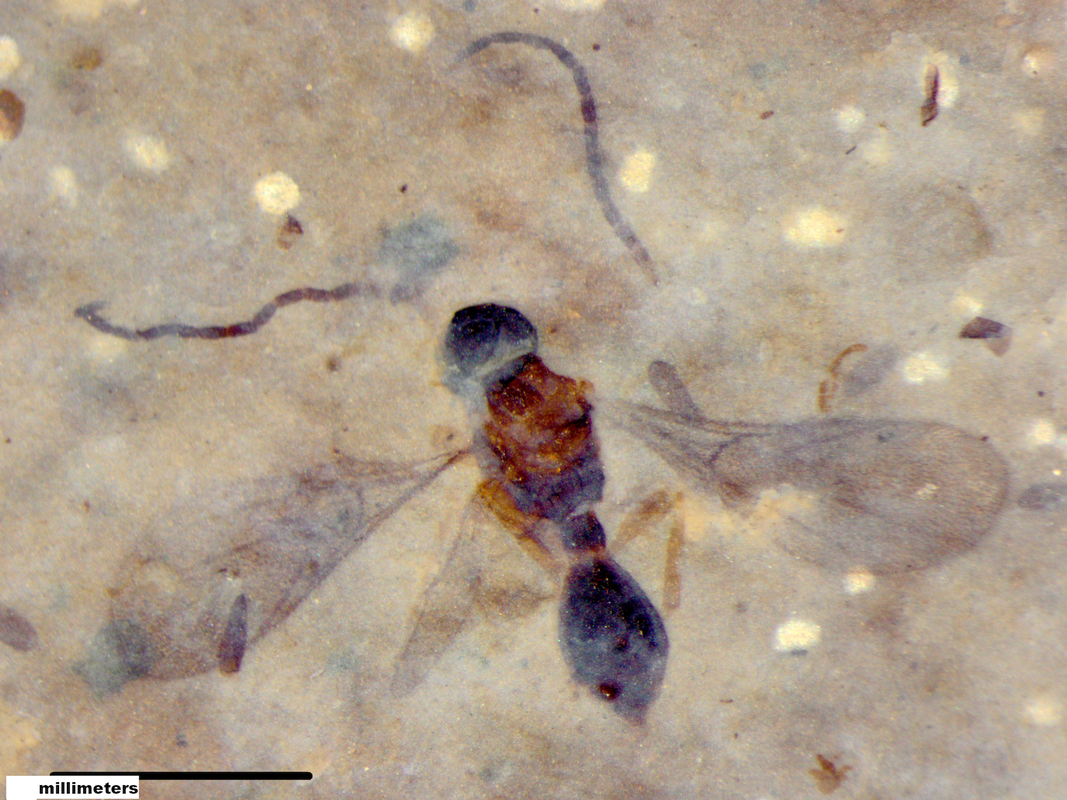 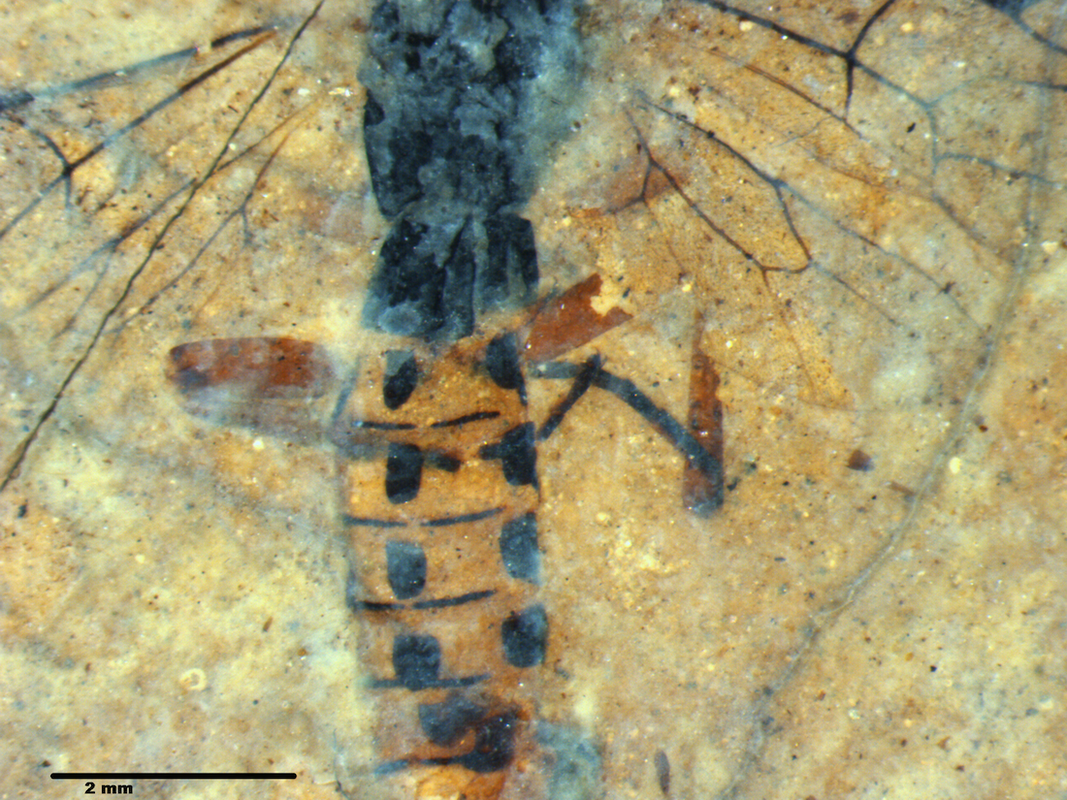 ​Many of the fossil insects of the Kishenehn Formation exhibit color.
The two photographs above depict parasitic wasps from the Kishenehn Formation. The upper photograph is of a diapriid (family Diapriidae: subfamily Belytinae). With a black head, dark red thorax, light brown legs and brown/black abdomen, it displays a variety of colors. The question is, are they the original colors? If so, have the pigments responsible for those colors been preserved? An intriguing question and one that we are pursuing.
The lower photograph is a close-up of an ichneumonid wasp (family Ichneumonidae). It too displays a variety of colors and, on its abdomen, beautiful patterning. The dark yellow of the abdomen is distinct from the reddish brown of the legs. The original colors? The original pigments? We do not yet know.
Publications on Kishenehn Formation ancient biomolecules

Greenwalt, D.E., Rose, T.R., and Chatzimanolis, S. 2016. Preservation of mandibular zinc in a beetle from the Eocene Kishenehn Formation of Montana. Canadian Journal of Earth Science, 53:614-621.

Greenwalt, D.E. 2020. Blood to Biomolecules: The Fossil Record of Blood and its Constituents, In: The Evolution and Fossil Record of Parasitism (Eds. De Baets, K. and Huntley, J. W.). Topics in Geobiology. Springer. Cham, Switzerland.